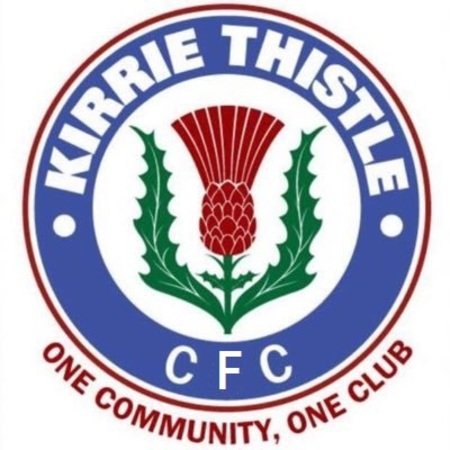 The club as we know it has developed over many years and has an extensive history of development and innovation.

Originally incorporated as a club in 1983, as Kirrie Boys FC, there is still a board bearing the club name and date on the side of the Changing rooms at Martin Park.

Over the next 35 years the club has grown to what it is today. During this time there have been excess of 250 coaches involved and 15 Presidents. There are currently in excess of 40 coaches  / helpers involved with the club on a weekly basis  many of whom also make up the General Committee. There are 225 players registered with the club but this is increasing on a yearly basis.

During  the lifetime of the club we have developed hundreds if not thousands of players, some of whom have gone on to be selected by senior clubs for the opportunity to further develop their careers. Each season teams are encouraged to enter competitions further afield (this has included some international trips) to not only play teams out with their own leagues but also to widen the Community Club ethos which is so important to Kirrie Thistle Youths FC. The Club also supplies coaches to local schools to help develop football and also highlight the best practice which is encouraged within the Club.

In 2005 the name changed to Kirrie Youths FC in order to encourage girls to become involved with the club and then in 2014 the club changed its name to Kirre Thistle Youths FC. This was to identify the close links to Kirrie Thistle JFC and encourage a player pathway for the young players coming through the youth set up so that they can continue playing all the way from Fun 4’s to Under 19’s to amateur and Junior levels of play.

In 2008 Kirrie Thistle Youths FC was proud to become one of only two clubs in Angus to be awarded the prestigious SFA QUALITY MARK STANDARD AWARD. This allowed  the club to use the official SFA logo on all documentation and was a sign that the club reached the exacting standards of governance required by the SFA. This has since been enhanced by obtaining the Development Award and in 2015 the club was awarded the SFA COMMUNITY CLUB AWARD.  This award  encompasses the following criteria - Eight teams or more represented by children, youth, adult and female teams. The Club maintains a close working relationship with the SFA representatives and is highly regarded for its progressive attitude to the development of the Club and players alike.

That year the Club celebrate its 25th anniversary and to mark this very special event, a commemorative medal was produced and distributed to all players who were registered with the club for the 2007 – 2008 season. There may still be some in existence in bottom drawers of some of our current coaching team.

Kirrie Thistle Youths FC have been affiliated to Boys and Girls Clubs of Scotland for approximately 10 years, this allows selected players the opportunity to take part in full International games between the home nations. These take place all over the UK and the players receive a cap for playing for their country. To date 10 players have represented the Club and community at this level.

A current project for 2017 / 2018 is the redevelopment of the Changing Rooms at Martin Park, this involves a complete refurbishment and creation of a kitchen / seating area and disabled toilet.

The Club are also invited to send the best low handicap a golfers at the older age groups to take part in competitions at Muirfield and Saline each year. A small alternative to football but a great representation for the club in another sport.

Each year the Club runs a Football Gala day, during the day all the players registered with a team are separated into 5 / 6 aside teams and a small league tournament takes place in various age groups from Fun 4’s to Under 19’s. There are stalls and a Barbeque all club registered players receive a free burger and juice as a gesture from the club. All participants receive a medal commemorating the day.

All coaches are required to be PVG checked and undergo coaching courses at various levels which are run by the SFA. There are also First Aiders and Child Protection Officers within the club, again all have undergone the appropriate training as required by the SFA,  SYFA and SWFA in order to maintain the SFA Community Club award.

The players are supplied with all equipment required to partake in the sport, including clothing and all training aids as well as the necessary footballs. All pitch fees are covered as well as training on the all weather pitch at Webster’s  Sports Centre. In the last 12 month period the cost to run the club was approximately £24000.

Kirrie Thistle Youths FC is a progressive community based club with a vision for the future to see as many children and adults playing football at as many different levels as possible.

To actively encourage young  players to give their best and develop their skills on the pitch in the hope that this may also assist them with the development of suitable life skills for the future.

Kirrie Thistle Girls under 9s sessions are on Mondays from 6-7pm at Websters sports centre during the winter months moving to Martin Park after the Easter break.